I was in Ashford this morning speaking at a socially distanced rally against the proposed lorry park which will see 27 acres of farmland concreted over. Here is what I had to say:

Ashford. Thank you for inviting me here today and it is good to so many of you. I’m Stuart Jeffery, and I campaign against air pollution.

So, air: one of the four “elements”, one of the four humors, it is our inspiration, it is essential for life. Yet we treat the air that we breathe as an invisible dump. A dump that results in around 64,000 people dying prematurely each year, in this country alone.

Air pollution has been linked to cardiac disease, strokes, respiratory disease, lung cancer, low birth weight, lower IQ , kidney disease , ADHD , and potentially every organ in the body. And it exacerbates covid too.

It is one of the biggest killers.

The statistics are frightening.

And the problems is not just long term exposure. This isn’t something that could be endured for a year or so in the hope that a solution could be found. High levels of pollution kill quickly.

Now I don’t live in Ashford so I have had to do some research and it appears that, according to your council, you have excellent air quality here. Legal limits haven’t been breached in years, apparently. It must be true, the numbers are published by the council.

It beggars belief though. A town with one of the busiest motorways running through it, a town just a few miles from the busiest shipping lane in the world, yet a town with reasonable air quality. As a health care professional I don’t do conspiracy theories, I look at the science, but I am just not convinced by the reports. And you know what they say about statistics!

The council now monitors around 50 sites around the borough but only for one pollutant, NO2. It doesn’t monitor particulate matter or ozone or any other the myriad of other pollutants.

So how will the lorry park affect you?

11,000 lorries a day heading to Dover. The uncertainty about the border – there is currently no deal with the EU. You know more than anyone what happens when Dover is closed or even slowed a bit. You get stack. Stationary traffic everywhere.

So isn’t putting it in a field helpful?

Firstly, using the site as a holding area – stack capacity: Two thousand lorries held one place will create a huge concentration of air pollution. Remember that stack was about 6,000 lorries along 20 miles of motorway, pollution that was spread over a wide area. Lorries run on diesel, the most polluting fuel for vehicles. Air pollution that will spill out into neighbouring areas. And space for 2,000 lorries to wait will not mean an end to the chaos of stack on the M20 or on the roads around Ashford.

Secondly, using the site for pre-border checks: Just as bad, if not worse. Slowly the lorries will creep though here as their paperwork is checked and corrected.

So what is the answer?

We need to get diesel powered freight off the road. Long haul freight needs to be by rail. Short journeys from distribution centres need to be made using electric lorries. That requires investment and political will.

We need to localise our economy. There is a reason that 11,000 lorries are trundling past. We need to grow most food locally and we need to manufacture locally. Globalisation of the economy has brought immense problems.

And we need either a workable deal with the EU, or perhaps we just need to apologise and reapply for membership.

Thank you. I’ll leave it there. 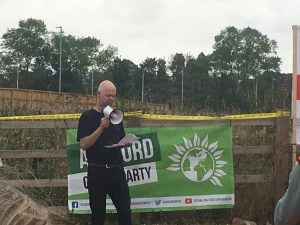