Earth Overshoot Day: how can I help?

It is perhaps fitting that I’m blogging about this a couple of days after Earth Overshoot Day (it was on 22nd Aug), I seem to have overshot it.

“Together we are stronger” was the last message in their launch video. Research is continually showing how we do better when we cooperate rather than compete, giving lie to the mood music of capitalists for the past couple of centuries. We need to be stronger given that we are tipping over the edge of the ecological cliff, we need to cooperate more but the rapid polarisation of views on social media suggests we have a long way to go. People need to stop arguing over things and debate them constructively while accepting that some people may have a different point of view.

Global recessions reduce our global footprint. You can clearly see the impact of covid on this year and as you look back at 2008, the early ’90s, 80’s and 70’s similar benefit to the Earth is seen. It gives the next lie to “decoupling”. Decoupling is the claim that the impact on the environment can be unlinked to economic growth, i.e. that you can have economic growth and still reduce the impact on the ecosystem. While it might be possible, it obviously hasn’t happened over the past 50 years and is almost certain not to happen in the future,

As a species, we are currently living as though there are 1.6 planets to support us. Not sure if anyone else has noticed but last time I looked there was just one available to us…

We are consuming too much. Way too much. Hooked on lifestyles that revolve around consumption: holidays, new cars, consumer electronics, plastic packaged goods that have flown twice round the world before they hit our plates, dinning and drinking out. I could go on.

Humanity needs to cooperate not just with each other but with the Earth too. We need a fundamental shift in the way we live our lives, the way we relate to the planet as well as to people. We need to realise that we are part of the ecosystem, part of the planet, part of the Earth. What we do to Nature, we do to ourselves.

There are a lot of us on the planet right now. This heightens the need to reduce consumption. The alternative is fewer people and I don’t see a queue of people volunteering for that option.

So my plea, two days post overshoot day, is to go outside and touch the Earth. Put your hands against the soil and ask yourself, how can I help. 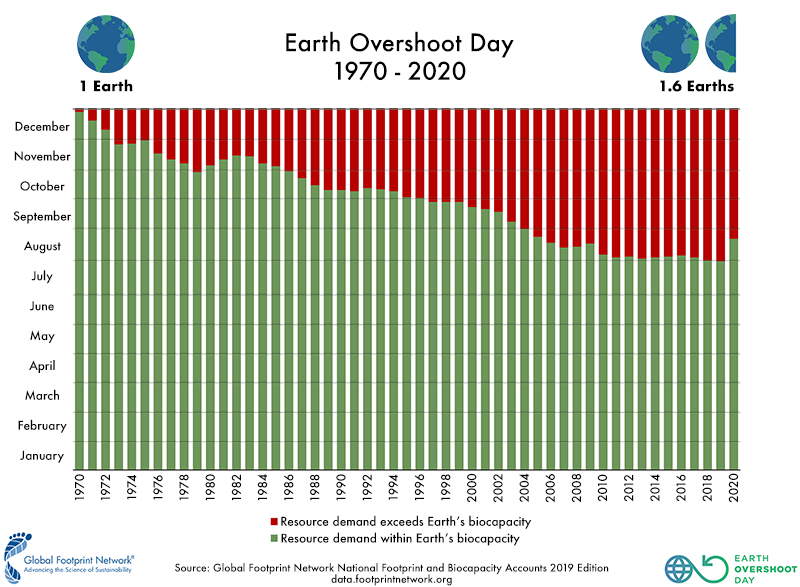