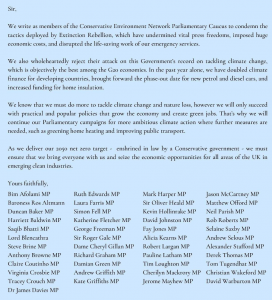 Last week you wrote to The Telegraph condemning the actions of XR in holding the press to account for their complicity in the climate and ecological emergency.

You published your letter during the week that the WWF published its Living Planet Report which highlighted the loss of 68% of the animal population over the past 50 years, a report that The Telegraph decided not to cover. It is really any wonder why those of us who understand the scale of the emergency do not feel that The Telegraph “tells the truth”.

You claim in your letter that protestors disrupted life-saving work of the emergency services. All XR blockades allow for the passage of ambulances and the only ambulance that I am aware of that was turned around was done so by the police, not the protestors.

Your Home Secretary accused XR of criminality in the same week that your Northern Ireland Secretary admitted your government’s criminality, albeit in a “specific and limited way”. One action is to ensure a future for our children, the other is for commerce. I wonder about the importance of these goals and how they are prioritised.

While I welcome some of the energy initiatives that you refer to, the scale and challenge of the emergency is such that these do not go anyway near far enough and are certainly not rapid enough to prevent ecological collapse in the very near future. I would have hoped that members of the Conservative Environmental Network you would be aware that carbon neutrality by 2050 will be a death sentence for our children and the planet.

The world is on track for the “hot house” scenario and without immediate action you and your government are condemning future generations to a version of hell not seen on the planet for 50 million years. The concept that business as usual politics can continue is absurd.

I implore you to look at the science and to truly understand the scale of the emergency facing us, one that is already affecting the planet and humanity and one that will escalate rapidly over the coming decades.

cc. the other 43 signatories to the letter to The Telegraph